Founded in 2014, the annual Storytellers’ Institute sponsored by Skidmore College’s John B. Moore Documentary Studies Collaborative (MDOCS) is a five-week residency hosted at the college campus. For the month of June, the institute welcomes its fellows and the Saratoga Springs local community to engage in lively and thought-provoking conversation, workshops and inspiration addressing a timely topic or theme.

The act of observing, watching, listening and recording, is fundamental to documentary practice and to surveillance. The documentary maker surveils a/the subject.  As populations are increasingly surveilled by all levels of government, through security and military interventions into public space, we also increasingly surveil ourselves. Personal data is collected and mined by private companies through social media and other forms of internet archiving that so many voluntarily use on a regular basis. What happens to this growing amount of documentary material amassed by surveillance systems? What rules govern its use? As with all archival material past and present, the entity that controls the content controls access, availability, and how stories are told and remembered.

From the strictly observational work of filmmaker Frederick Weisman, to multi-media artist Sophie Calle’s personally invasive investigations, the work of documentarians unintentionally and intentionally interfaces with SURVEIL/SURVEILLED. Documentarians increasingly use tools of surveillance to position the user as the surveiler or the surveilled in order to confront the ethics of these technologies. Photographer Tomas-van-Houtryve’s Blue Sky Days uses drone photography to challenge U.S. use of drones abroad by photographing on America’s own soil the same crowds that have become regular targets for U.S. foreign air strikes—weddings, funerals, groups of people exercising, etc. The data driven project In Limbo invites the user to willfully give up personal privacy in order for the web-based platform to construct a narrative of the user’s life based on the information archived about them throughout the internet.

During this year’s Storytellers’ Institute, we will: analyze documentary as a form of surveillance; consider the ethics and legalities of observing and the vulnerability of being observed; learn how to protect from surveillance; and engage with the documentary material that surveillance systems yield to explore its storytelling and truth telling potentials.

Each June, Skidmore College’s John B. Moore Documentary Studies Collaborative (MDOCS) hosts a weekend-long Documentary Symposium – public events combining festival presentations of artistic work with symposium-style conversations around an annual theme. The symposium was free and open to the public. 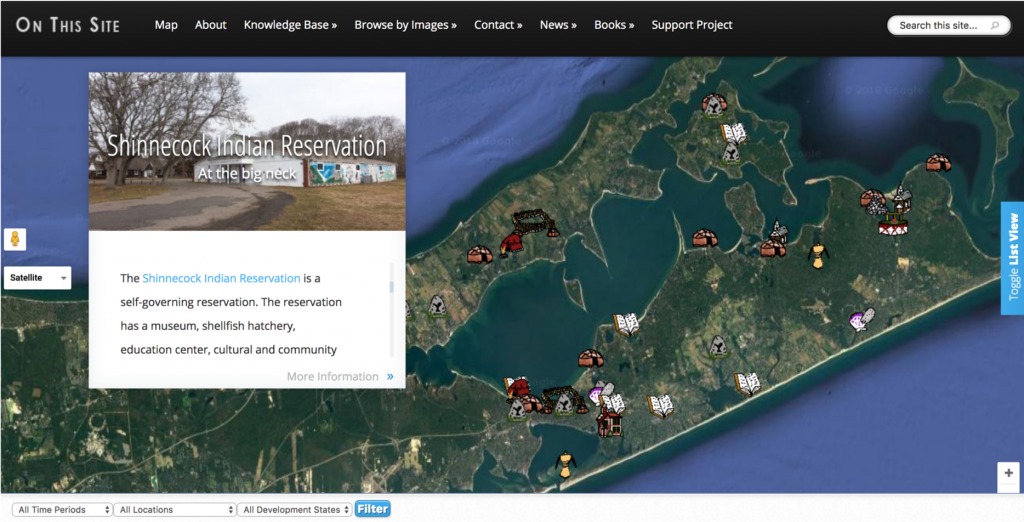 I began by presenting a previous ongoing art-based research project I began in 2016 titled ‘On This Site’,  a site-specific history project using photography as an entry point. The process involved visiting and documenting important indigenous sacred, historical, and archaeological sites throughout Long Island, NY, spanning ten thousand years of our presence.

Each of the icons represent a unique site, and the eventual goal is to populate the map in a way that features something in nearly everyone’s back yard, granting a connection to our history, while also denying the past as something inaccessible and abstract by contextualizing it in terms of place rather than time.

The motivation behind putting these hard to find histories and texts on the web came out of personal experiences of being referred to as a vanishing or extinct race. Even within whispering distance I’ve overheard the apathy of our struggle over self-determination.

In relation to surveillance and place, there’s a conflict between ignoring us as a people with a potential payoff that one day the public may truly forget about us, and based solely on our physical appearance we will be expelled from our remaining homelands and vanish to fulfill colonial fantasies. 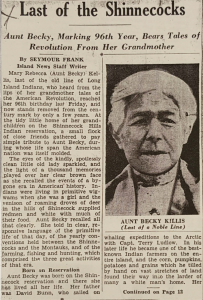 With these struggles in mind, I’m beginning a new project thinking about the benefits of surveilling one’s own community for the goal of filling in gaps of representation utilizing google maps and street view as a playful public platform for portrait photography. 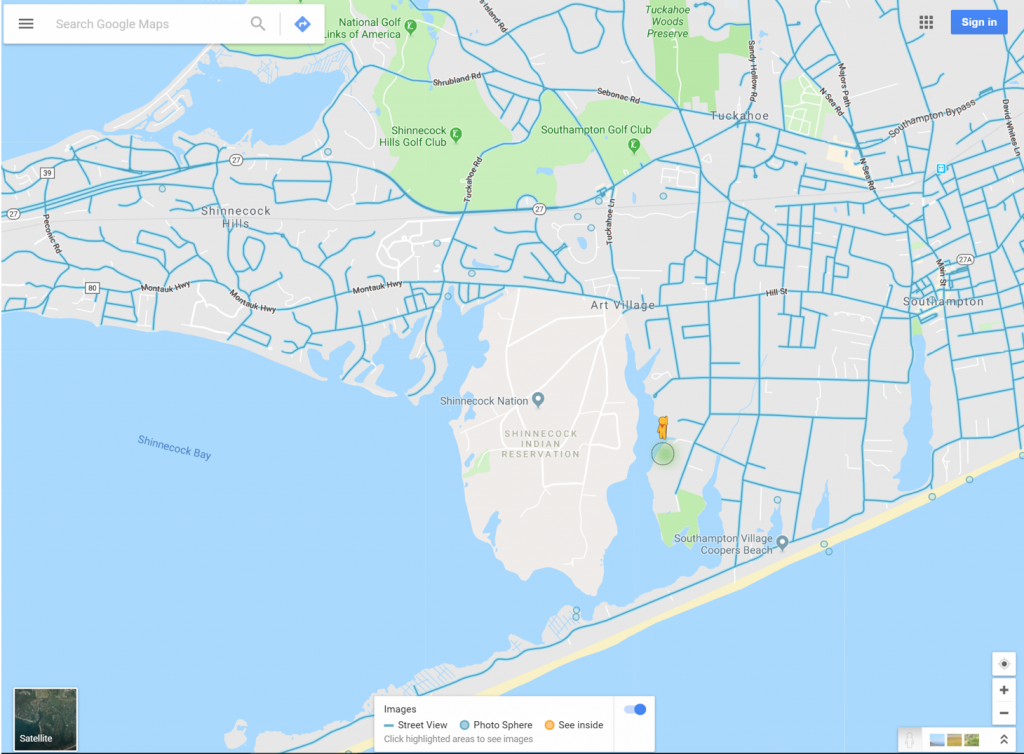 Now to compare this to the Shinnecock Indian Reservation, there’s a total lack of availability.

As a resident, this made me laugh when I first saw it, but when I see this in other places, it is easy to associate the area with being potentially dangerous or of conflict. This also makes me think about the use of census in relation to photography, data collection, money allocation, and if that has any meaning in such an insular low income community.

Google street view’s mission has been described as ‘organizing the world’s information and make it universally accessible and useful.’ – by being omitted from this database we can refer back to the idea that observing our presence may not be useful.

Looking at the Shinnecock Reservation on Google Maps in comparison to it’s surrounding communities presents a unique opportunity to represent ourselves using our own means; ultimately reinforcing our connection to our land. Each of our portraits will incorporated into Google Maps as 360 panoramic image, capturing our essential presence and a snapshot of the surrounding area. 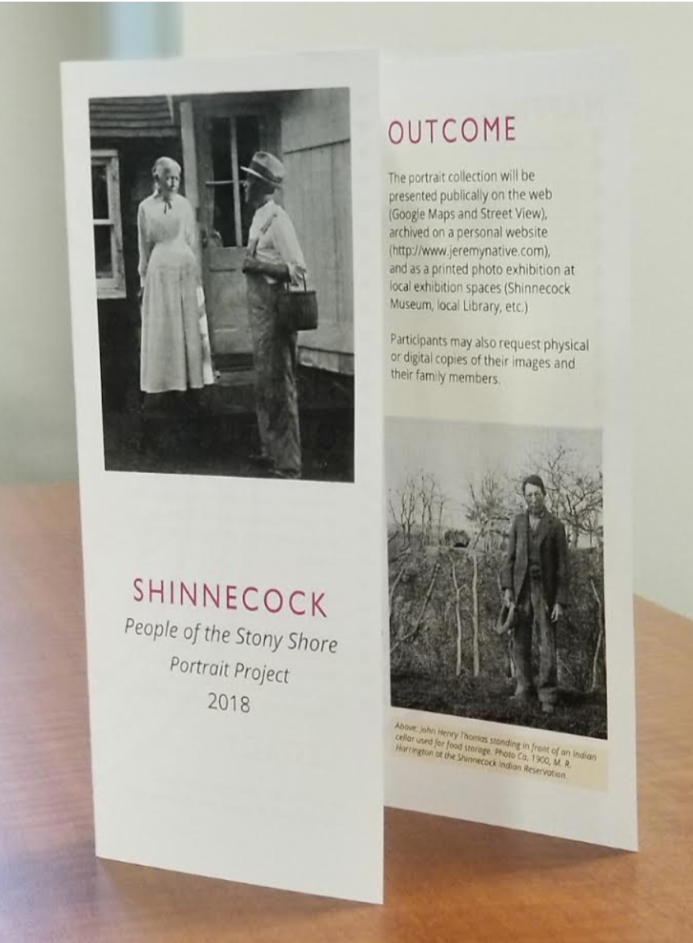 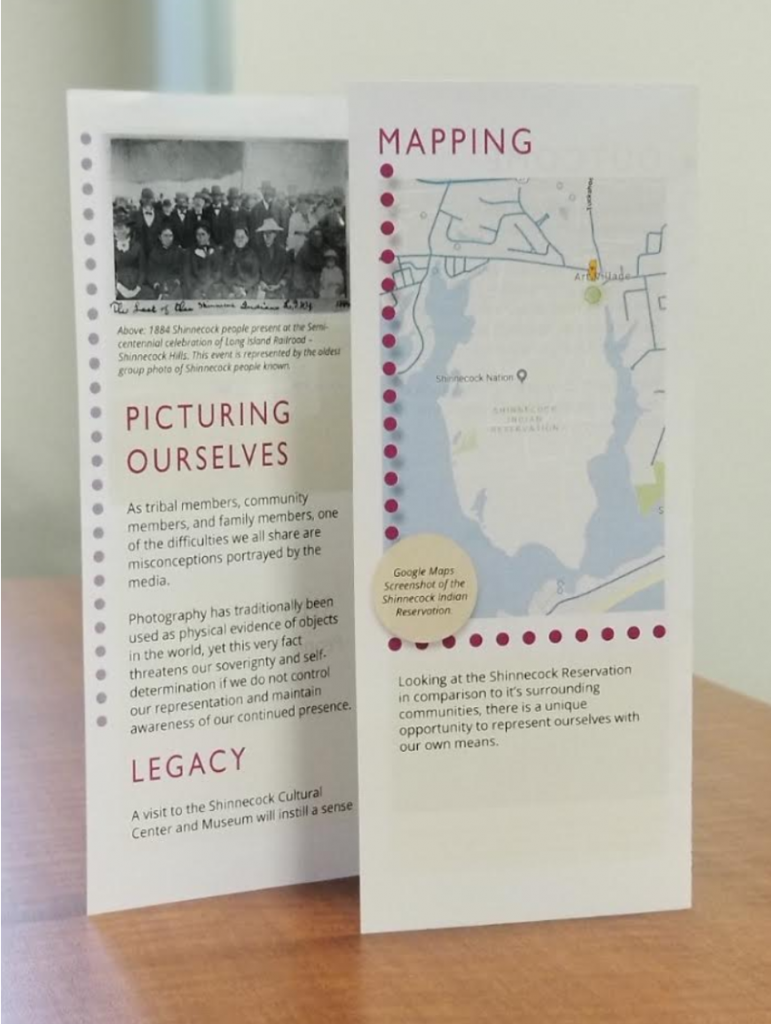 The project begins with a  brochure that illustrates the purpose behind the project, the legacy of family photos, and the platform it will be on. I hope to introduced the project to tribal leaders and community members of the Shinnecock Nation – and in the next months collect portraits and oral stories to encourage involvement and to better our community relations.

The Shinnecock Portrait Project and Vincent’s portrait has been featured in Public Art Fund’s “Art on the Grid” exhibit! Read more about the exhibit here:   https://www.publicartfund.org/exhibitions/view/art-on-the-grid-july27/ About the Exhibition 50 artists’ reflections on the pandemic at 500+ locations citywide. Art on the Grid responds to this historic moment. Our lives have been completely transformed by the devastation of a global pandemic and the rise of one of the largest social justice movements in modern history. This spring, Public…